Raymond Sheppard produced many studies of birds and animals from life, mainly at Regents Park Zoo and was made a Fellow of the Zoological Society in 1949. He also painted landscapes, family portraits, in watercolour, oil, and pastels . He was a founder member of the Wapping Arts Group, a group of artists who sketched and painted by and around the river Thames in London, which was formed just before WW2 but did not start in earnest until 1946.

Publications: How to Draw Birds (first published by Studio in 1940), Drawing at the Zoo (1949 Studio), More Birds to Draw (Studio 1956).
Lived in Kenton and then Harrow Weald, Middx.
Clubs: Chelsea Arts, Langham Sketch.

Raymond Sheppard died in London of cancer in 1958 with which he had battled since 1949. He also served in the RAF photographic section during the WW2. Despite long periods of ill health and the interruption of the War years he was, nevertheless, prolific in demonstrating his wide range of artistic ability as a master draughtsman, illustrator, and landscape and wildlife artist..

Had Raymond Sheppard lived beyond his mid 40s his reputation
as one of the foremost illustrators of his generation might have
been secured – his premature death resulted in his name sinking
into obscurity for half a century.
Only his prolific career as an illustrator (nearly 100 children’s
books in the single decade following the end of WW2) has prevented
his name from disappearing altogether and secured him a
credible place in the standard reference works of the period. What
has never been appreciated before is the remarkable diversity of
Raymond Sheppard’s oeuvre. Aside from his more familiar studies
of wildlife his studio has revealed a series of remarkable portraits,
thrilling boy’s-own period illustrations, plein air seascapes,
landscapes, views of the Thames and surreal compositions, which
at times verge on abstraction. All have in common Sheppard’s
stated aim to express his inner emotion:
“...that peculiar, unexplainable tightening inside that makes you
want to laugh sometimes, sometimes to sing and dance for joy, and
sometimes just a little sad.

To read the full text, download the catalogue here : 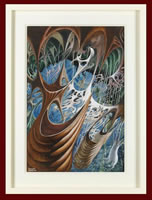 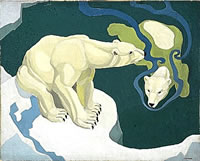