Painter of imaginative and classical subjects in oil, tempera and gouache; mural painter; designer of film and stage sets; book illustrator and advertising designer. He was born in Hastings, Sussex. After Oxford University, Armstrong studied at St John's Wood School of Art, 1913-14, then after service in the Army in World War I returned to St John's Wood briefly. He held his first one-man show at the Leicester Galleries in 1928. In 1933 he became a member of Unit One, after which his work took on a surrealist character. In the 1930s Armstrong worked as a designer for theatre and film, including the first performance of the ballet Façade and several films made by Sir Alexander Korda. He also did work for Shell-Mex and ICI. During World War II Armstrong was an Official War Artist. For the Festival of Britain 1951, he was commissioned to produce The Storm, and exhibited extensively at the RA from that year. He painted a ceiling for the Council Chamber, Bristol, in 1955 and six years later a mural for the Royal Marsden Hospital, at Sutton, Surrey. Armstrong had strong left-wing political convictions and from the time of the Spanish Civil War, when he painted Pro Patria, his pictures occasionally reflected his views. Symbolism is also a feature of his work. Armstrong's pictures are fastidiously painted in muted colours and reflect his own dry wit and gentle nature. Along with John Banting, he is one of only a handful of British artists whose oeuvre can be correctly described as surrealist. The RA held a memorial exhibition in 1975. He lived in London. 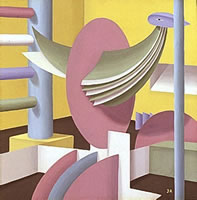 John Armstrong
The bird, circa 1927