Rogers was born in Wisbech, Lincolnshire, and was educated in Ely, Cambridgeshire. He began painting in 1937, having received no formal training. Until 1948 he produced mainly portraits and landscapes, then turned to coloured geometric abstract pictures and cut-metal sculptures. Rogers served in the Royal Air Force, 1940-45, and traveled extensively in Europe, India and Egypt. He held solo exhibitions at Drian Galleries, 1966, and Vincintoria Art Gallery, Brighton, 1968. BBC Southern Television made a film on his work, which is held by the Warsaw National Museum, Poland. Belgrave Gallery and Abbott and Holder latterly exhibited Rogers' work. 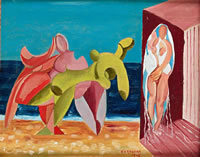