Doris Zinkeisen won a scholarship to the Royal Academy Schools in 1917, where she quickly earned critical acclaim. Shrugging off the outcry surrounding the inclusion of women students in the 1921 RA Summer Exhibition, she embarked on a prestigious career and received many notable commissions, such as stage design work for Charles B. Cochran in the 1930s and murals for the RMS Queen Mary.

She also exhibited in the US, Paris and London, including at the ROI – to which she was elected in 1928. In 1938, she published Designing for the Stage.

During WWII, Zinkeisen was employed by the British Red Cross to record their activities in Europe. Her harrowing painting Human Laundry, Belsen: April 1945 – a lasting testament to the horrors of WW2 – stands in stark contract to the vibrant compositions she produced both before and after the war. 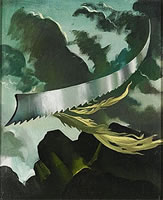 Doris Zinkeisen
Wear and Tear, circa 1935