Anna Zinkeisen studied drawing and anatomy before winning a scholarship to the Royal Academy Schools in 1916 to study sculpture – exhibiting at the RA in 1919 and winning the Landseer Award in 1920 and 1921.

On leaving the RA, she worked with her sister Doris on murals for the Queen Mary and the Queen Elizabeth liners and produced notable portraits. She also provided illustrations for several books, including Sophy Cassmajor by Margery Sharp, published in 1934.

While volunteering as a nurse at St. Mary’s Hospital during the Second World War, Zinkeisen made pathological drawings of war injuries for the Royal College of Surgeons. She was awarded RDI in 1940. In her self-portrait of 1944 (held in the NPG), clutching a bundle of paint brushes and wearing the bracelet of the St John’s Ambulance Brigade, for which she was volunteering, her gaze leaves the viewer in no doubt as to her professional status. 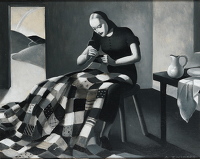 Anna Zinkeisen
All the Colours of the Rainbow