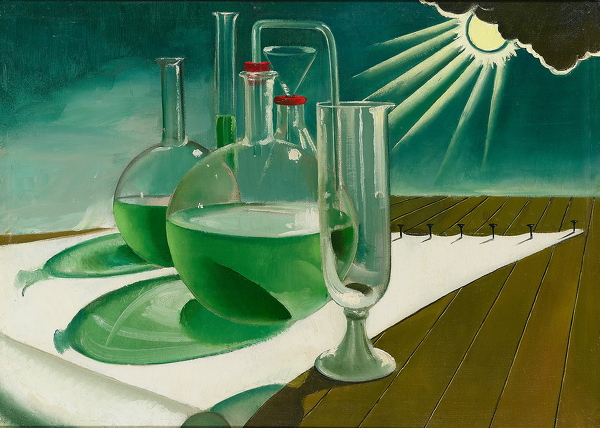 
This was one of a number of Zinkeisen paintings commissioned by ICI Ltd in the 1940's as part of their Aspects of Industry series.  Other artists who contributed to the scheme included Cuneo, Pears, Wadsworth, Nevinson and Skeaping and Anna's sister Doris.

This still life, commissioned  in the late 1940's,  celebrates the invention of a new dye called Caledon Jade Green.  The painting was subsequently used  for an ICI advertisement which, ironically,  was reproduced  in black and white.

According to the 1950 issue of  Art and Industry,  Caledon Jade Green is especially resistant to laudering and dry-cleaning, besides being little affected by bright sun light.  Its discovery was a major achievement of the British dyestuffs industry, and ranks as one of the worlds's five greatest dyestuffs discoveries of recent years, three of which have been the work of I.C.I chemists, issue 48, p. 36

We are grateful to Philip Kelleway for his assistance