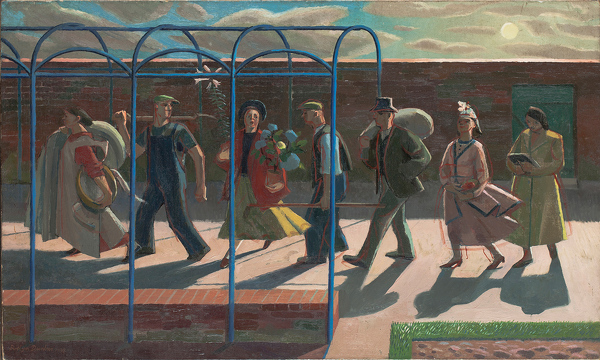 Exhibited: Corn Exchange, Rochester, May 1939; Evelyn Dunbar - The Lost Works, Pallant House Gallery, October 2015 - February 2016, cat 72. Literature: Evelyn Dunbar - The Lost Works, eds Sacha Llewellyn & Paul Liss, July 2015, cat. 72, page 110, 112-113; Evelyn Dunbar: A Life in Painting, Christopher Campbell-Howes, October 2016, pages 238-240. Seven Days, one of Dunbarï¿½s most intriguing - and powerful - allegorical paintings, has ï¿½Design for a muralï¿½ written on the frame and scrawled on the back. Completed in 1938, it was exhibited in May 1939 at the Corn Exchange, Rochester, with this subtitle. What mural this refers to is not known. Thereï¿½s an unusual clue to its destiny as a mural design: several extraneous red transfer lines remain on the canvas. Which way should we read the figures? Left to right, the normal direction we read in, or right to left, following the group from the light to the dark, following the increasing length of the shadows? Does it matter? I think it does, maybe in the Kierkegaardian sense of life being lived forwards but understood backwards. On one level Seven Days is all about gardening, with one telling exception. Moving from left to right, Numbers 2 and 3 (the woman with the lily and hydrangeas), 4 and 5 all carry references to making things grow, to looking after creation, even at the level of the garden, in return, as is usual in Dunbarï¿½s work, for having been given it by the Creator. Number 6 sums up the benefits: sheï¿½s carrying a basket of fruit, probably plums. Then Number 7, whom we can now confidently associate with Sunday, is reading, attending to things of the mind. Maybe itï¿½s her Bible, we donï¿½t know, but significantly behind her thereï¿½s a door in the wall, maybe opening on to wider horizons and brighter truths. The top of the wall is strongly lit, suggesting that whatever lies beyond it basks in sunlight. On another level Seven Days is a personal statement. In preliminary sketches Number 1 is carrying a baby, her own particular harvest and promise for the future. Why did Dunbar change her to a woman carrying washing? Perhaps the answer lies in the fact that a little before the design of Seven Days was finalised Dunbar miscarried. The father was Charles Mahoney, her colleague and lover, formerly her Royal College of Art tutor. They werenï¿½t married. Their relationship came apart as her pregnancy was confirmed. The miscarriage and separation was a time of terrible misery for her, leading to what Dunbar called her ï¿½crisisï¿½ years, which only ended with her 1940 appointment as a war artist. Christopher Campbell-Howes


We are grateful to Christopher Campbell-Howes for assistance.