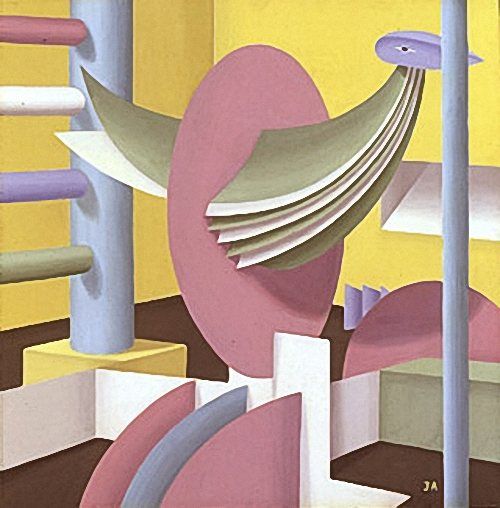 Provenance: Peyton Skipwith
Exhibited: London, Leicester Galleries, John Armstrong, January 1928 (6); London, Fine Art Society, Britain Between the Wars, 1918-1939, March 2004, no. 2
Surrealism was born in France in 1924 and did not cross the Channel in any concrete form until 1936 when the International Surrealist Exhibition was staged in London. However, this fully-fledged Surrealist image by Armstrong, in his typically bold palette with its emphasis on pinks, yellows and greens, was included in his first one-man exhibition at the Leicester Galleries in 1928. By any standards it is a remarkable image for its period. Unit One, of which Armstrong was a member from the outset (formed in 1933 by Paul Nash), played a major part in promoting Surrealism in Britain and organising the International Surrealist Exhibition in London.